TECHNICAL DATA - THE USE OF DRIERITE IN PRESERVATION AND PACKAGING 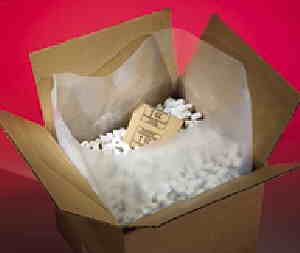 A commonly used storage container is a corrugated carton or a wooden box. Unless they are wax-coated or resin-treated, water vapor is transmitted through them quite readily. Standard practice is to line them with a plastic film, such as polyethylene. While the plastic film will hold liquid water, water vapor may pass through it. For instance, 1-mil polyethylene will pass water vapor at the rate of 1.5 grams/sq. ft./ 24 hrs, while 4-mil polyethylene will only pass about 0.05 grams/sq. ft./24 hrs at 75° F and 100% RH. We normally recommend that you use a minimum of 4-mil polyethylene, or something equivalent to it in water vapor transmission rate.
For short term storage - two to four weeks - we suggest that you use eight ounces of DRIERITE for every 20 sq. ft. of 4-mil polyethylene, plus sufficient DRIERITE to remove the water in the contents of the bag or container. For medium term storage - one to three months - use eight ounces for each 10 sq. ft. of vapor barrier. For long term storage - three months or longer - use eight ounces of DRIERITE for every five square feet of vapor barrier. Enough extra DRIERITE will have to be added in the last two cases to remove the water in the contents of the container.
The quantities of DRIERITE recommended above are based on relatively stable storage conditions. If there are large daily fluctuations in temperature or if extremely high temperatures and high humidity are to be encountered, the amount of DRIERITE should be doubled.

How Much DRIERITE Is Required?